The History of Lavender Plants – the herb royalé

Lavender blue and lavender green,
When I am King you shall be Queen

Lavender, the word, is thought to have been derived in the Middle Ages from the Latin word lavare, meaning to wash, since the Romans habitually used lavender as a ritual to perfume their bath and also use as a hair and body oil.

The lavender plant has become a symbol of peace, cleanliness, purity, chastity, longevity, perseverance, relaxation, love and affection. Given the royal patronage this plant has enjoyed with European royalty over many centuries, we believe lavender can truly be considered the herb royalé

The Egyptians were fond of aromatics which they used in their temples to perform the sanctuary in which offerings of food and drink and the preparing of sacrificial food and clothing were made; as part of the process of embalming the dead; and for aesthetic purposes during their lives.

Lavender plants were used for the process of mummification, and on some occasions when opening ancient tombs that had remained undisturbed for thousands of years, archeologists have been met by the fragrance of dried lavender. Egyptian priests prepared most of the fragrant oils and unguents and were therefore much esteemed as the perfumers of their time, guarding the secrets of a mysterious art.

Early Greeks used lavender mainly for its medicinal purposes, and a Greek physician and botanist, Dioscorides, in AD 60, referred to the beneficial effects of lavender for its “deobstruent and roborant (laxative and stimulant) qualities enabling it to be used for chest complaints.

Romans used two types of lavender plant. L. Stoechas for medicinal purposes and L. Spica to extend, and later replace some precious imported oils then commonly used. Pliny the Elder mentioned seems to have distinguished these two varieties of lavender in use at that time.

While it is believed lavender plants were cultivated during the Dark to Middle Ages by religious communities and used in its dried state for culinary and medicinal purposes, this has yet to be verified. Much of the horticulture at that time was carried out in the vicinity of monasteries and convents, which were then the community centres for worship and healing.

Abbess Hildegard of Bingen (Germany 1098-1179) founded a Benedictine monastery and appears to have made the first clear recorded reference to lavender in her Physica. In this she expressed her opinions of herbs and trees, their medicinal properties, and also the results of her findings. She noted ‘the strong odour and the many virtues of the plant’, and mentioned lavender wine as a liver remedy. Other uses for lavender were then noted as being for control of head lice, clearing the eyes, and warding off evil spirits.

About the same period, there is an unconfirmed reference to the use of lavender in an Arab culinary recipe book. 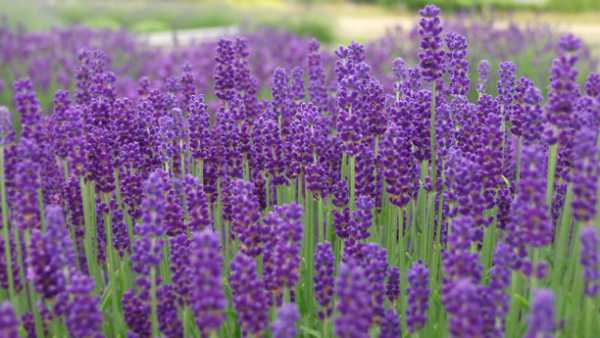 The Welsh Physicians of Myddfai of South Wales compiled a collection of recipes and remedies known as the Red Book of Hergest among which was mentioned Llafant, Llanafntly, Llafanallys, or lavender in Welsh and this is considered evidence of the use of lavender as a medicinal plant in thirteenth century Wales.

The traditional use Greek and Roman medicinal use of lavender plants was continued in the sixth century by the Byzantine and later the Arabs.Arabs are recorded as having used lavender flowers as an antispasmodic and expectorant, and applied lavender water to maintain skin tone and condition, also using lavender vinegar on their cheeks instead of rouge to give colour.

Many herbs, including lavender were introduced to France by Charlemagne around 800 AD. Lavender was used widely in Burgundy in the 1300’s, and was grown in a royal pleasure garden in Paris at hat time. Two prominent medical schools in Marseilles and Montpellier are thought to have harvested wild lavender from their regions for its medicinal and healing properties, in this same era.

There are many references to the introduction of lavender into Great Britain, including, perhaps, the Celts thousands of years before Christ was born, in 1265 at which time the Queen of England was Eleanor of Provence, or by the French Huguenots in the 1500’s who grew it on a greater scale.

Parkinson, an herbalist and apothecary to James I thought of lavender as of ‘especiall good use for all griefes and paines of the head and brain’. The popular use of herbs, including lavender peaked during the reign of Elizabeth I who always ensured she had a bowl of lavender conserve on her table that was made from lavender produced on her farms.

Turner’s herbal dedicated to Elizabeth I, noted ‘the flowers of lavender quilted in a cap comfort the brain very well’, and that it was highly recommended for all diseases of the brain that ‘come of a cold cause’.

During this time lavender was used extensively for herbal healing, purifying, culinary and cleaning purposes. Flowers were burnt to induce sleep and create a peaceful atmosphere and also used because of their virtue in ‘protecting clothes from dirty filthy beasts’.

Charles VI of France demanded lavender stuffed pillows to sit on, and Louis XIV had his shirts rinsed in a special perfume that included lavender, marjoram and nutmeg infused in orange water. Charlemagne planted sufficient lavender to ensure a plentiful supply for distillation.

Queen Henrietta Maria (wife of Charles I) grew long borders of a rare white lavender in her gardens at Wimbledon. During summer flowering, stores were laid up in her still rooms so she could enjoy bowls of lavender pot-pourri in each room and bath each week in lavender scented water,

Queen Victoria, perhaps the most significant champion of lavender was courted by Prince Albert with nosegays of lavender, and always ensured the royal residences were impregnated with lavender perfume.

The present era of gardening has continued from that time. During the seventeenth century lavender was commonly used as a lawn in Ireland and it is recorded that in 1683 Sir Arthur Rawdon of Moira Castle in the County Down had an acre of lavender as lawn.

While lavender was traditionally grown as an herbal household aid, it was not until the late 1700’s that it was grown commercially in Britain.

The early immigrants in the nineteenth century when coming to Australia and New Zealand brought lavender with them, so they could continue to use it for the wide range of herbal applications then in common vogue. Coming to a new land, it was important they were self-sufficient in all things, including health remedies, cosmetic applications and household uses.

Lavender as an indispensable herb in antipodean gardens was commonly found planted close to the house to ensure ready availability for all expected uses.

From 1930 onwards, Duncan and Davies Ltd, a plant nursery of New Plymouth, New Zealand referred to listed lavenders in their catalogues as ‘English, French and Dutch being very suitable as dwarf garden hedges or low borders’.

While herbs in New Zealand were in short supply before the 1950’s this changed when Avice Hill, an entomologist who loved lavender began her Lavender Herb Garden in 1957.

D. H. Buisson identified the lavender plant as a potential commercial crop in 1979, and following trials of selections of L angustifolia and L. latifolia conducted by the Lincoln Research center of the Department of Scientific and Industrial research at Christchurch (N.Z), the results were published in 1982.

Further trials in 1983 followed, from which time other growers including Arthur Wilson (designer of our still pot) undertook further crop growing trials and investigations.

Where to find us